As told by Andy Zanaglio: 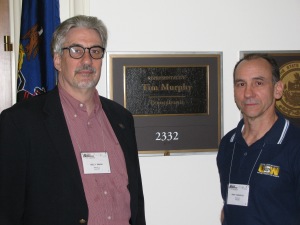 Click the picture to see more from the meetings

Meeting with Congressman Tim Murphy’s aid, Brad Grantz – Besides being rude and not even letting us sit in his office, Murphy’s aid, Brad Grantz brings up the same stuff his office always does, that the Congressman has a bill that will crack down on CHINA on trade and how they manipulate their currency. And he added that our President, Leo Gerard, supports his bill. I told him that I was well aware of our support for portions of the bill, so I asked, “How many more co-sponsors’ for the bill have been added and how hard is the Congressman working at increasing support for his bill”? Well, I don’t believe he got around to answering that question. I let him know that I didn’t think that anything was going to get done with CHINA because they are propping up our economy with big bucks and they are letting Multinational Corporations run the show. It’s big money vs. slave labor and guess who’s winning. I think, until Corporations find a heart or the people rise up, not much will change in either country or around the world. About 5 minutes before our meeting was about to end, Mr. Grantz produced a picture of me protesting outside his South Hills Office with my “chicken feed” sign, and began to explain why the Congressman doesn’t want to meet with me because I protest in front of his office? I told him that I protest in front of his office because I disagree with about 99% of the way that the Congressman votes on working class people issues.

Meeting with Congressman Mike Doyle – Congressman Doyle was simply a joy to talk to. He truly understands what working families are going through and is doing everything he can to help us. He truly represents the Pittsburgh area in a positive light. It was an honor to meet with him.

Meeting with Senator Bob Casey Jr.’s Legislative Correspondent, Mathew Lachman – His office was very interested in what we had to say and let us know that Senator Casey would do all he could to protect working class people issues.