Join USW International Vice President Fred Redmond and District 10 Director Bobby McAuliffe in supporting the UPMC Workers Fast for the Future Wednesday, April 16th at 11:30am
UPMC Headquarters (600 Grant Street)
Meet in the lobby at 11:15am to walk over 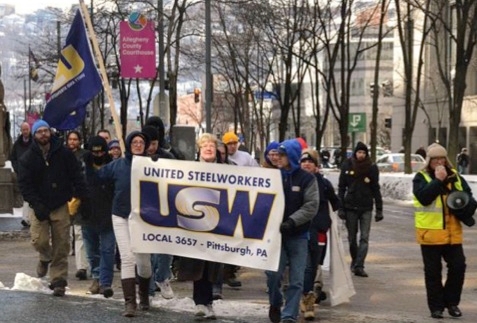 About the UPMC Workers Fast for Our FutureUPMC workers have built an incredible movement to transform our city by transforming UPMC, our largest employer, healthcare provider, landowner and charity. Our movement has won thousands and thousands of supporters – faith leaders, elected officials, community activists and our coworkers – to the simple idea that everyone who works should do so with respect and dignity, and that everyone who needs care should receive it. Every day workers and the people of Pittsburgh challenge UPMC to live up to its charitable mission.  Our fast is also a challenge. It is an act of hope and anticipation, and also a show of strength and determination.  Because UPMC puts profits over people, we have become accustomed to hunger and hardship. When hunger and hardship is experienced in isolation, and outside of a movement for justice, they are just hunger and hardship. Our fast transforms hunger and hardship into a call for justice.  We are putting fasting for ourselves, to test and develop our commitment. We are fasting to call on UPMC to put aside business as usual and work with us to build a better future.